Make It So: Justice League ’80 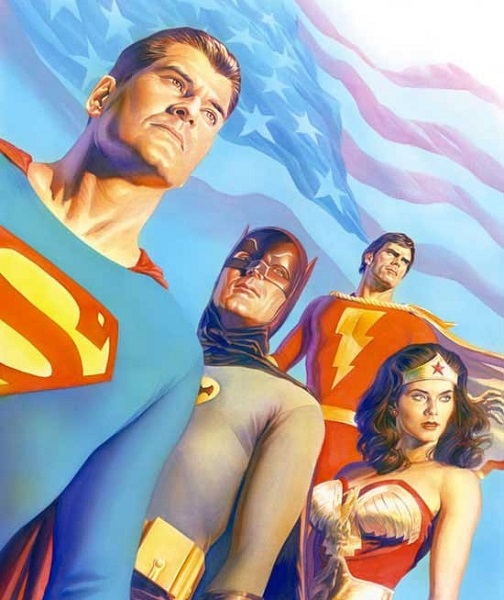 Make It So: Justice League ’80 by Jerry Whitworth

Since September 2013, DC Comics has produced several comic book series based on the 1966 Batman television series which featured Adam West and Burt Ward as Batman and Robin, respectively. This culminated from an almost miraculous deal established between Warner Bros. and 20th Century Fox the previous year to produce merchandise based on the TV show (most notably, publishing the series onto DVD). While the main comic series would end its course a few months ago, it racked up an impressive array of crossover series with Green Hornet, currently in The Man from U.N.C.L.E., and the upcoming Avengers (from Britain in Steed and Mrs. Peel). Only the future can say if any other crossovers maybe on the horizon. Two years ago, it was announced the Wonder Woman television series would receive a similar treatment to Batman ’66 in Wonder Woman ’77 (which has been published infrequently since last summer and will produce its first collected work next month). Since the announcement of the Wonder Woman series, fans have waited for a similar such reveal about Superman either adapting the George Reeves or Christopher Reeve version of the character to no avail. However, DC Comics could very well go a step further should it decide to assemble the Justice League. While Marvel Comics was building a live action television empire with series based on the Hulk and Spider-Man as Captain America and Doctor Strange emerged as TV films, DC Comics found live action hits in the Wonder Woman TV show and Superman films in theaters. Around this time, Hanna-Barbera tried to loosely adapt its popular Challenge of the Super Friends cartoon into a live action series called Legends of the Superheroes. Bringing back Adam West and Burt Ward as their iconic characters of the previous decade (along with Frank Gorshin returning as the Riddler), Superman and Wonder Woman were legally tied up elsewhere as noted. In place of Superman, the series would get instead Captain Marvel whom was featured in a popular live action TV series from Filmation only two years earlier (in fact, Marvel was set to star in Challenge but was still licensed to Filmation at the time who reacquired Marvel after Legends for his own animated series). In place of Wonder Woman, Legends employed Black Canary (who was also sought for Challenge during its development). The Justice League was rounded out by the Flash, Green Lantern, Hawkman, Atom, and Huntress (likely a stand-in for Batgirl). Unfortunately, the low budget series was mostly played for cheap laughs (lacking the charm of the Batman series) and never went beyond two televised specials. The specials would eventually emerge on DVD six years ago after decades in obscurity (produced in a legal gray area between tape traders at comic book conventions in the interim) as Hanna-Barbera is seeing a renewed interest of late with new comic book series and a planned emerging cinematic universe. When Wonder Woman ’77 was announced, there was an immediate stated desire by its creative team to tackle a crossover with Batman ’66 that has yet to emerge. A seemingly obvious turn of events, in recent history the case for this advent appears even more likely as Wonder Woman ’77‘s first trade collection is finally materializing and Batman ’66 has discovered new life in crossover mini-series. If planned in advance, such a crossover could be the bedrock for a new series forming something of a printed cinematic Justice League. Consider, at the same time Adam West and Burt Ward returned to their roles as the Dynamic Duo, they did so while part of the Justice League where Wonder Woman and Superman found great success outside the printed page. It would then not be a stretch that a Batman/Wonder Woman crossover could result in an invitation to the Justice League from the former to the latter. The only obvious wrinkle is that a series based on the Christopher Reeve Superman has not emerged but that in and of itself could be reason enough to bring about such a series (again, laying a bedrock). Imagine then a Superman ’80 series following the events of Superman II (1980) perhaps in part adapting elements of what was originally planned for Superman III (1983) which included the introduction of Brainiac, Supergirl (who went on to get her own film in 1984 played by Helen Slater), and Mr. Mxyzptlk (with Dudley Moore the top choice to play the part). A Superman ’80 series could then crossover with Wonder Woman ’77 leading to something of a Justice League ’80 series. The possibilities of a Justice League ’80 series are virtually limitless. A merging of the Adam West Batman, Lynda Carter Wonder Woman, and Christopher Reeve Superman placed into a world not unlike that of the Super Friends could be iconic and engaging (which a series like Alex Ross and Jim Krueger’s Justice could demonstrate the possibilities of establishing). The alliance of a Cesar Romero Joker and Gene Hackman Lex Luthor, a Paradise Island adventure teaming Wonder Woman with the Yvonne Craig Batgirl and Helen Slater Supergirl, the Burt Ward Robin and Debra Winger Wonder Girl forming a team of teen sidekicks, the Legion of Doom acquiring the Bizarro-inspired failed Nuclear Man from the deleted scenes of Superman IV: The Quest for Peace (1987), the missed opportunity of a Teresa Graves Nubia fighting Superman, and the Justice League versus the Phantom Zone Prisoners. Of course, this only scratches the surface as the kind of treatments Batman ’66 provided to the likes of Harley Quinn, Killer Croc, Clayface, Poison Ivy, Scarecrow, and Bane could be done similarly for League foes like Amazo, Crime Syndicate, Queen Bee, Felix Faust, Despero, Doctor Destiny, Starro, Royal Flush Gang, and the Lord of Time. There are of course also the multitude of storylines that could be loosely adapted, such that instantly comes to mind is aspects of Mark Waid and Terry Dodson’s Silver Age where the Justice League swaps bodies with the Injustice League (undoubtedly a homage to “The League That Defeated Itself”). The Gene Hackman Lex Luthor in control of Superman and the Burgess Meredith Penguin in control of Batman alone is an enticing prospect. Aquaman, prominently featured in the Super Friends’ various series, would not officially find his way into the live action realm for some time but would be featured in a DC Comics-approved fan film about him in 1984 by UCLA students Thomas Farr and Jeff Klein and would be featured notably in the 1976 Sea World Superheroes Water Ski Show (which had about two dozen characters). 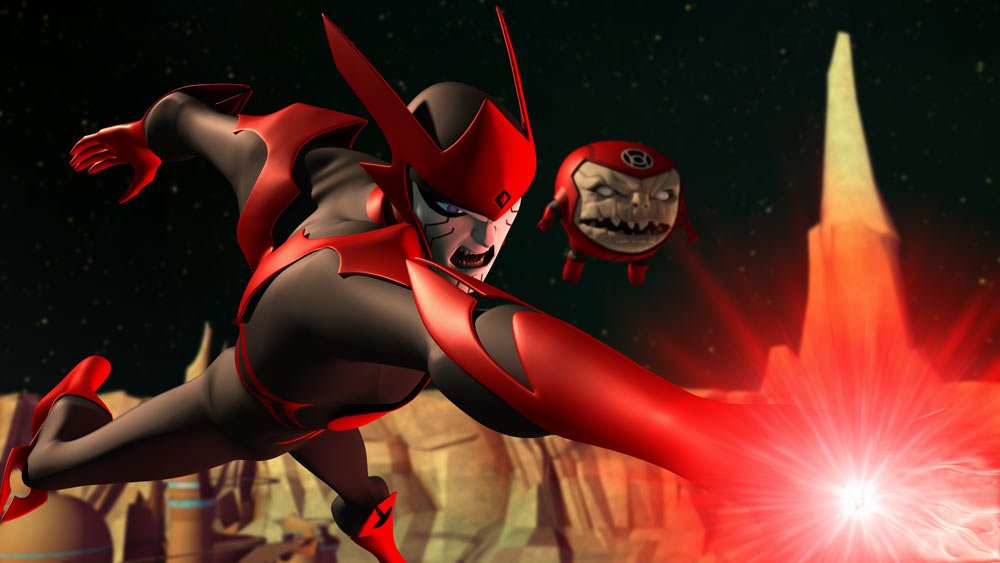 What is the Red Lantern Corps?

STAR TREK: THE NEXT GENERATION/DOCTOR WHO ASSIMILATION2 #7